Things to do in Mossel Bay 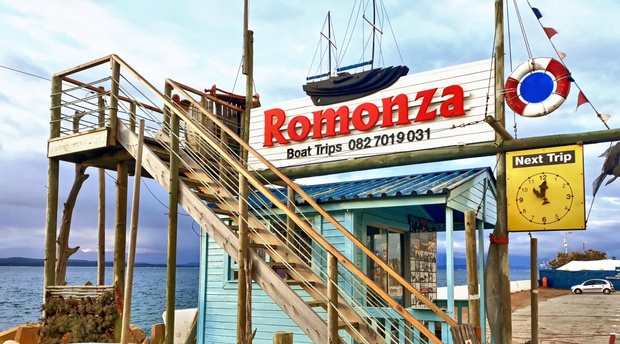 Mossel Bay is the Capital of adventures in the Garden Route and the ultimate for the 4 "B's" - Bed, Breakfast, Beach & Bush!
Cut down on travel cost and driving time, as Mossel Bay has it all!
Book at Amzee Bokmakierie to participate in unusual and exciting experiences and activities.

Mossel Bay is a Malaria free area, where visitors can also experience the Big 5. Our tap water is safe to drink and we boast with many Blue Flag Beaches. Voted as Town of the Year in 2017, Mossel Bay has since also been voted the friendliest holiday town in the world!

The Longest zipline over the ocean in the world - adrenalin-filled activity to be enjoyed by all! Participants can enjoy the magnificent views as they make their way down. Mossel Bay Zipline in partnership with SA Forest Adventures has been described as ‘1,1km of screaming fun’ and runs from the cliffs below Point High School to the deck of the current (Shark Lab) aquarium at the Point.

Mossel Bay is a very rich area with its abundant sea life of diverse fish, seals, whales, penguins, other sea birds, dolphins, the occasional orca and, of course, a plentiful supply of Great White Sharks. For this reason we decided to base our shark cage diving headquarters on the Garden Route of South Africa.Great White Sharks have always fascinated humans. Perhaps it is their imposing size, their graceful beauty perfectly adapted to their environment, patrolling our oceans since the beginning of time…

If you would like to come just that little bit closer, to experience the Great White Shark in its natural environment above or under water or perhaps just learn a bit more about them. You have come to the right place.

A flight in a Hot Air Balloon is like nothing else you’ve ever experienced. No other form of flying comes anywhere close to its calm, serene nature. Experience the quiet stillness of the morning sunrise whilst soaring among bird and cloud alike. This truly is what dreams are made of.

Join NOVA Hot Air Balloons, the first of its kind on the Garden Route.

Watersports - Fly above the water

Romonza Boat Trips have been operating for more than 25 years in Mossel Bay. Romonza offers Seal Island trips (all year round). Sunset cruises (November to April) and boat-based whale watching with a permit (July to October). Fully qualified tourist guides on all our boat trips.

Botlierskop with a range of activities from safari game drives, horseback safaris, pampering spa therapies, restaurant options, children’s activities, spacious decks and swimming pools, there truly is something for everyone. Bring your friends and family for a day out to remember. You’re spoilt for choice at the range of activities on offer – from half or full day safari packages, pampering spa treatments, delicious lunches, horseback safaris, guided game drives and so much more. Our new Day Centre opened on 1 December 2018. This leisure area features a swimming pool for adults, a pool with water slides for the kids and a fountain pool for the little ones. Come and enjoy our newly-built shady picnic areas on wooden decks at the dam.

All this and a very warm welcome awaits you!

Indalu is a stunning game reserve situated just 20km from Albertinia and 30km from Mossel Bay in the Western Cape, South Africa. We are situated along a magnificent coastline in one of the best adventure holiday destinations in the world. At Indalu Game Reserve in the Garden Route it is not only the elephants that have remarkable memories; the visitors leave with a treasure trove of unforgettable memories to last them for a lifetime.

Tandem Skydiving in Mossel Bay, South Africa is an experience that will stay with you for a lifetime! Not only will you enjoy all of the thrill and excitement of freefalling on your very first jump, but you’ll also be taking an exhilarating scenic flight over the Mossel Bay area with an eagle-eye view of the Indian Ocean, the Outeniqua Mountains, and the beautiful beaches between Cape Town and Port Elizabeth! It’s the most scenic place to go tandem skydiving in the Western Cape, along the Garden Route, and near Cape Town.

Experience a guided tour from Bokmakierie Guest House
Visit the first “Self Catering” caves of  164 000 years  ago between Dana Bay and  Mossel Bay. Experience the awe of standing at Point of Human Origins.
Visit world renowned archaeological site with early evidence for modern human behaviour.
Mossel Bay, South Africa. Our tour is a dual journey - one in space and time, and one within.
Our main goals are to create awareness of the original human design, to awaken the human spirit, and to inspire people to discover themselves and to change the way they behave towards all life on our planet.

(10-15 minutes) High adrenaline, high speed and wave jumping boat trip that can accommodate up to 12 people from ages 10+. Departing from Mossel Bay Harbour Waterfront , the trip will take you around Seal Island at speeds that may exceed 120 KM/H (weather and sea conditions permitting).

Shark-watching at its best on board our Luxury custom-built winch boat SENORITA. Weather conditions will determine area of operation within the bay. Trip can accommodate up to 10 people. Flights start and end on the boat (no swimming with the sharks)

Garden Route Casino is nestled within the beauty of the famed Garden Route in the Western Cape. You will find us on the spectacular Pinnacle Point, in the seaside town of Mossel Bay. If you’re looking for fun and exciting things to do, or you just want to relax, come and live the life with us. Have some fun in our casino and enter our exciting promotions for the chance to win incredible prizes, or come and enjoy some of the top shows and events in Mossel Bay. You can have a delicious meal at the Bravo Lounge, where you can experience live entertainment as well. If you need to unwind, you can treat yourself at La Vita Spa. Whether you are on holiday, or a live in the area, there is plenty of family fun to be had when you come and escape with us. Licensed by the Western Cape Gambling & Racing Board - No persons under the age of 18 allowed in the Casino

Eden Wine Route encompasses the very best that this district has to offer and we aim to market wines from the entire area nationally as well as internationally. From unique Karoo landscapes, fynbos and mountain ranges, to Knysna’s indigenous forests and the white sandy beaches of Mossel Bay – Eden Wine Route’s wine tours will allow visitors to explore the Garden Route’s hidden gems.

All aboard the Diaz Express, a fun rail experience for the whole family run on the existing Transnet rail network in the Garden Route region of South Africa, between George and the seaside resort of Mossel Bay. Mossel Bay, a popular tourist destination, serves as the main point of departure with excursions to a variety of attractions including the ever popular Santos Beach, Great Brak River, Glentana and Maalgate.

All excursions have lovely views over the Indian Ocean (with a ringside seat for whale watching during the season), river estuaries and the indigenous plant life of the Cape Floral Kingdom.

Diaz Water Park is a fantastic family attraction located at the Diaz Hotel. The water park has various super tubes as well as a heated pool, offering fun for all ages. Bring the whole family along for a day of fun in the sun. There are braai and picnic areas available for leisurely lunches.

With a wide variety of activities and entertainment available, we guarantee you endless fun and entertainment for the whole family. You can look forward to a fun-filled holiday with our adventure park, super tube, play area, adventure golf and sizzling sun lounges – all ready to entertain you with endless days of fun!

The Dias Museum Complex is situated near the beach, shops, restaurants, banks and the tourist information center. Inside the Maritime Museum is a shop where postcards, stamps, books, souvenirs and small gifts can be bought. On the grounds of the Dias Museum Complex are mountain tortoises, ducks and museum cat. In the Granary there are conference facilities available for 48 people or if used in cinema style, seating for up to 100 people. Catering can be arranged. Mail from the shoe is collected twice a day (once a day out of season) by the Post Office. Whales can be observed from the museum grounds during June to November.

A live speciman table with examples of plants and flowers found in the Mossel Bay area on display in the granary. Bartolomeu Dias – the master mariner after which the Mossel Bay Museum Complex is named, was the first explorer to set foot on South African soil here in Mossel Bay on 3 February 1488.

This structure was erected in 1902 next to the Post Office Tree as an extension to the old mill and was mainly used as a store. In later years Mr. Joe Shirley used the building for his plumbing business, after which it became known as the “Shirley Building”.

In 1500 Pedro de Ataide, Commander of one of Cabral’s ships, on his return journey from the east, left a letter of importance in a shoe or iron pot under or near a large tree.

The Braille trail makes it accessible to visually-impaired people so that they can read about, feel and smell the wonderful collection.

The first building was built around 1830 by Alexander Munro from Scotland for £25.

This site was discovered in 1968, not far from the Post Office Tree.